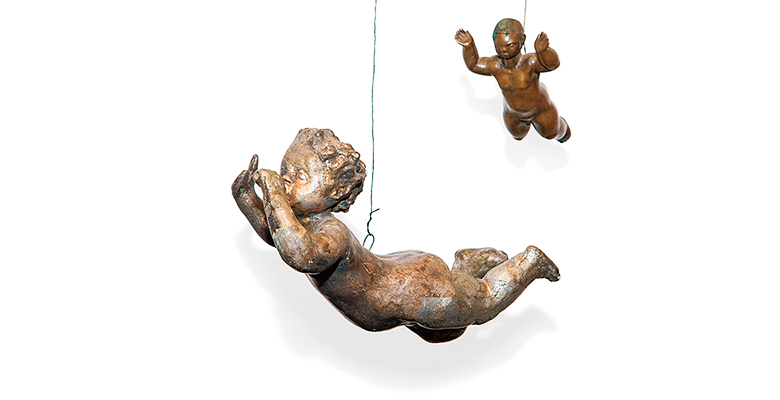 In the early days the focus was on luminaires for public environments, an emphasis which has been maintained since then. In 1936 ateljé Lyktan moved to Åhus on Sweden's south-east coast, where the head office is still situated. We have occupied the present premises since 1977. During the whole of our history, good design has had a decisive role. As far back as the opening of Bonniers department store in New York in 1949, ateljé Lyktan was achieving international fame for its original and graceful luminaires. This success continued during the 50s, when, for example the lamp model Struten or “Cone” was awarded a gold medal at the Milan Triennale. Even today some of Hans Bergström’s luminaires are still in the ateljé Lyktan range.

Hans Bergström’s motto was: ”Light must be white and shine freely”

His successor Anders Pehrson used to say: ”Good lighting is not always lots of light, but always several light sources”

Anders Pehrson took over the company in 1964. He would come to put his personal stamp on development in the company until the end of the 1970s. He was a formidable PR man who made both the company and Åhus well known. During his time ateljé Lyktan adopted a more industrial and large-scale character. His philosophy of furnishing a room with many different lighting points resulted in a wide range in which groups of product families were very important. He would speak about the four important Fs (in Swedish), namely Form, Function, Colour and Family. Bumling and Supertube were two of his many classic products.

The real international breakthrough came in 1972, when 16,000 luminaires were delivered to the Olympic village for the Munich Olympics. In 1974 ateljé Lyktan was bought up by the Fagerhult Group. Since then development has been characterised by modernisation of production technology and a widening of the range. Thanks to new designers and new lighting technicians we are always in a position to fulfil the ever stricter lighting and energy requirements, but within the framework of ateljé Lyktan’s renowned style.

It was in a Copenhagen milk bar that a newly graduated arts student and his girlfriend decided on a name for their new business. Swedes Hans Bergström from Karlshamn and Verna Norell with roots in Åhus had acquired premises in Helsingborg’s craftsman’s quarter. The idea was to make lamps and weave rugs. Hans would look after the lamp making and Verna would be in charge of the weaving workshop. The Swedish words for workshop and lamp combined to form the name – ateljé Lyktan.

The business soon took off and Hans and Verna’s workshop was overrun with customers wanting to buy lamps and craft textiles. The lamps were especially popular.

In 1936 the business moved to Verna’s family farm in Åhus. A long half-timbered building from the mid seventeenth century becomes their first home and workshop. Making the journey with them was a young apprentice called Palle Pernevi. However, the decision to widen the nearby road forced the young couple to demolish the fine old farm and build new on the same site. By 1938 the new modernist villa with adjacent workshops was ready and the business in Åhus really started taking off.

The year before the end of the war, ateljé Lyktan expanded by taking on extra sewing staff and metal workers. The first workshop had become too small for the growing flock of employees and a dozen sewers moved into the old station building ”Gärdskan”. Once World War II was over, Lyktan started exporting luminaires outside the country’s borders. By 1946 ateljé Lyktan had distributors as far away as South Africa.

In the later years of the decade, the company expanded further and Hans’s lamps spread throughout the country. Wealthy homes and public environments would be the main takers for his creations in glass and brass. With the approach of the hopeful fifties, innovations begin to occur on the materials side as well. Plastic from the land of the future, America, made it possible for ordinary men and women to afford the white lights of Åhus in their own homes.

Hans Bergström’s luminaires achieved international distribution and his lamps were even represented at the Museum Of Modern Art in New York. The designer created lighting installations for the Students Union in Lund which attracted attention both at home and abroad. One of his most treasured awards on the luminaire side was obtained at the tenth Milan Triennale in 1954. A cone-shaped luminaire in plastic, Model 181, was awarded a prize for its simplicity and grace. This luminaire is still in production and is popularly known as the ”Cone”.

Despite the increasing demand the following years were marred by financial worries for the business. The big factory extension at Gärdskan and the rehabilitation and modernisation of the private villa proved a drag on the manufacturer’s finances. In 1956 the company converted to a limited company in partnership with various other players in the hope that the new money would stave off bankruptcy. Just a few years after the new company was formed the business was again on the rocks. Swedish Philips stepped in as a financial guarantor at the end of the fifties and in 1962 bought out the business, retaining it until 1964.

In 1964, the Philip’s Board offered the whole business in Åhus to its Design Director. The Director was a 52 year old man with roots in Gothenburg called Anders Pehrson.
His business sense would be decisive for the future of ateljé Lyktan. With his nose for trends and design he could see the potential in several of the luminaires and decided to pick out the best and risk mass production of the most saleable models. A move which would prove most successful.

In 1968 he created and developed one of the biggest advances in Swedish lighting manufacture ever - the Bumling family of luminaires. Anders would come to be obsessed by what in Swedish are four Fs: Form, Function, Colour and Family.

Anders Pehrson had once been selected for training for Olympic cycling, ahead of the Olympic Games in Berlin in 1936. He never made the Olympic squad, but took his revenge later. In 1972 Lyktan arrived at the Munich Olympics with 16,300 lamps. In terms of numbers this is the biggest order in the company’s history.

Two years after the Olympic Games, Pehrson sold ateljé Lyktan to the West Swedish company Fagerhult. He remained in position as CEO, Artistic Director, Marketing Manager and well-known face to the outside world throughout the seventies. Bumling, Supertube, Tube, Knubbling and more would become well-known lamps in homes and public settings. These models were developed in different directions in the following years.

The factory down at Gärdskan was too small for the production which Fagerhult had in mind for Åhus. In 1977 a new factory with adjacent office buildings and showroom were completed at their present site. The opening ceremony was a great event and Lyktan’s new premises were inaugurated by the new monarch, King Carl XVI Gustav. In the same year, the company Kosta Lampan also came under Fagerhult’s ownership, and with it came designers Per Sundstedt and Anna Ehrner. Five years after the opening of the new factory, Anders Pehrson passed away, a few months short of his 70th birthday.

The technically minded Bengt Fitger, who took over the role of CEO after Anders Pehrson, would increasingly orient production in the direction of public environments. During the eighties a number of designers would be active at Lyktan. A new light source arrived in the form of the halogen lamp, and this was much used in new luminaires. Meanwhile the incandescent bulb more or less disappeared from newly designed products.

Founder Hans Bergström returned to Åhus after two decades in Malmö and at the end of the decade submitted new lighting proposals to ateljé Lyktan’s product committee. As the nineties approached there were a large number of luminaires by different designers in the range, but the big demand for Supertube and Bumling was no more. No successors to these giants were yet in view. Olle Anderson produced the outdoor luminaire Stockholm, which currently lights up streets and squares throughout Sweden.

When Rolf Brandstedt was appointed CEO in 1992 his first task was to make a new bestseller for the indoor market a reality.

In conjunction with the arrival of lighting consultant Tommy Govén at Lyktan, several products followed which would be incredibly important for the future of the company. One of Govén’s most important luminaires was Fovea – the first in the world to be designed for the new slim T5 fluorescent lamp. Fovea would continue to be developed up to our days and can be seen in lighting solutions in office landscapes throughout Sweden and abroad. The functional lighting which had come to dominate again yielded place to a more designed product. The incandescent bulb returned to several of the lamps in the range and by the end of the millennium Lyktan was again showing that form and function are equally important. Fovea was awarded a prize at the Hanover Lighting Fair in 1996. The same year the founder of ateljé departed this life. Hans Bergström lived to be 86 years old.

The Tundra lamp, designed by Kristin Leibel and Kristian Andréason, won a prize for its exquisite design, and several products of a similar kind took form at the factory. Mia Cullin produced La Mia and the pendant lamp Clara could soon be seen at the majority of McDonald’s restaurants in the country. Bengt Källgren’s Time became a competitor to Fovea, or a supplement if you will, and Richard Wegele became the new CEO in the middle of the first decade of the century. Shortly after his arrival the company rejuvenated its appearance and reviewed its range. To realise Lyktan’s new image a design committee consisting of various designers and design agencies was appointed. The new graphic profile was introduced in May 2007 at a launch party in Gothenburg.

At the same time the rate of new products and product launches was increased. The full-scale luminaire range Bebop was launched, as was a retro-inspired lamp family designed by Henrik Schulz at Wingårds Architects. The first luminaire from ateljé Lyktan with the new LED light source would be the table lamp Tesla, but the technology was also applied to the outdoor side. When Govén’s exterior family of products Origo was presented in 2008, the bollard model was also fitted with LEDs.

LEDs were a big topic of conversation at the lighting conference in January now that the days of the incandescent lamp were over. During the conference Stefan Borselius exhibited his cellular plastic lamps Bud and Buddy – the lamps which are their own packaging. A few months later Borselius created the luminaire Fogg.

In Stockholm, Ogle becomes part of Thomas Eriksson Architects' lighting concept for the Metro Library. This lamp has an LED light source and is designed by the Form Us With Love trio.

Olle Lundberg presented a new ”big” luminaire family. The size of big sister Megalo was an amazing 120 centimetres in diameter, while the baby of the family still measured 40 cm. As ateljé Lyktan approached its seventy-fifth birthday, negotiations opened for creating a lamp together with the manufacturer of the world's fastest mass-produced car model. Christian von Koenigsegg and Richard Wegele reached agreement that the two companies would create an anniversary luminaire as a limited edition. The luminaire would be made from carbon fibre with the latest light source, LED technology. In October 2009 the Koenigsegg lamp, K1, was launched – the world’s quickest lamp!